Why We Chose It: “Violation” by Sharon Solwitz

What we loved about Sharon Solwitz’s “Violation” (in our Spring Issue 105) when we first encountered the story was how seamlessly it alternates between two very different perspectives while maintaining a consistent point of view. Attempting this style of narration comes with plenty of challenges: it’s hard enough to capture all the complexities of just one character’s perspective as a story unfolds. Sydney is a high school student recently bereaved of her younger sister; McCann is a police officer who carries the guilt of failing to prevent a shooting while on duty at the school where he worked. The events of the story elucidate the struggles of these two very different characters; they also manage to depict the common ground between them. The fine balance of character summary and present action in this story creates this sense of a similarity in experience between the characters. Sydney cannot listen to her friend describing her own familial difficulties without becoming wrapped up in her own: the narration allows us to feel her regret for not being able to treat her sister better while she was still alive. McCann is unable to so much as sit down by himself for a meal at home without his thoughts drifting back to the day he was taking his lunch break when the shooter entered the school’s library; we can feel his remorse because of the way his memories follow him throughout the story.

“Violation” is the work of an author who knows her characters so thoroughly that she can move around in time—stepping back into the past or throttling ahead into the future—to provide an insightful detail at just the right moment in a scene so it deepens our understanding of her characters without distracting us from the moment at hand. From our first read of the story, we were convinced the series of events that unfold was the right sequence needed to render its characters as close to life-like as possible. After encountering characters as richly detailed as Sydney and McCann, we decided to accept the story right away. 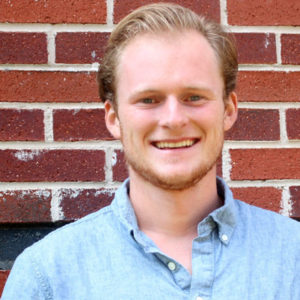 Richard Moriarty just finished his second year in the MFA program at UNC Greensboro. He’s originally from Kansas City. He went to University of Miami (the Florida one) for undergrad, where he studied advertising. He’s working on a collection of stories tentatively titled River Runners. Books currently on his nightstand: The Complete Stories of Leonora Carrington, Steinbeck’s Travels with Charley, and Run the Red Lights by Ed Skoog.