“Potential for miracles, catastrophe, and everyday amazement”: An Interview with Sarah Heying

Sarah Heying has fiction, poetry, and nonfiction in Broken Pencil, The Chariton Review, Ellipsis, Kestrel, and online at Bitch. She is currently working toward her PhD at the University of Mississippi. Heying’s new story, “The Chair Kickers’ Tale,” received the Robert Watson Literary Prize and appears in the Greensboro Review 105.

Rose Himber Howse: Your story begins with a fable of sorts, which (along with the title and your use of archaic syntax in certain moments) sets up the expectation that we are reading a fairy tale. I loved the juxtaposition of that mood with the dialogue, which is hyper-realist and modern, and the general content, which I’d describe, probably badly, as being mostly concerned with delineating the minutiae of manual labor and of generally getting by in the world. The fact that I found this contrast so jarring led me to interrogate my own assumptions about which spheres I associate with the possibility of wonder and which I don’t, which was uncomfortable in a productive way. What relationship do these two supposed opposites—the magical and the mundane—have for you?

Sarah Heying: I think you described it perfectly. I recently read this fantastic book, The Great Derangement by Amitav Ghosh. In it, he talks about how the word “improbable” is not the opposite of “probable,” but instead an inflection upon it. He argues that the modern novel sought to distinguish itself from literature of the fantastical or unbelievable by hiding exceptional moments under fillers of specific detail—sort of this representational scene-building that rationalizes the world to a place of few surprises.

Many of us grow up reading literature full of surprises, but then we’re encouraged to “grow out of it” in favor of more serious, realistic literature that’s supposedly more representative of the way we supposedly live. But life constantly surprises me, scares me, awes me, confuses me, and then I write a story to try to understand that sense my wonder a bit better, and I try to do so without rationalizing it into a manageable box of certainty. Storytelling, for me, is not a purely representational art. It’s an exploratory art full of potential for miracles, catastrophe, and everyday amazement.

RHH: “The Chair Kickers’ Tale” doesn’t really have any women in it, which I didn’t question at all on first read. Statistically, it seems accurate in a story about five people who do tough physical labor and one big boss. But in chatting with you during your acceptance phone call, you mentioned that you actually worked as a Chair Kicker in a coliseum. Given that you experienced this as a woman, I’m curious how you ended up with the model for the story that you did: a portrayal of male brotherhood that feels so evocative in how it encompasses both crassness and tenderness.

SH: When I stepped into that job at the Coliseum, I was immediately and frequently reminded that I had entered a men’s space and that hiring me was a bit of an experiment. During my first month, one of my main duties was to check all of the mouse traps and dispose of their little dead bodies because they thought that job needed “a woman’s attention to detail.” Then they started letting me put up the pipe and drape and apply the linens and table skirts, and then, after at least a month, they let me start setting up chairs and building stages, basketball floors, etc. While I was working there I also took a part time job selling beauty products, so I had to switch between these two extremely gendered spheres on a daily basis. It was a very formative to my own gender identity as a lil’ baby butch lesbian to feel both a part of and apart from both of these spaces.

I actually started the first draft of this story while I was still working at the Coliseum, and from the beginning, it didn’t include any women. Though many of the original characters I wrote didn’t make the final cut, Benny was always there as sort of an outsider figure. I feared that if I had made Benny a woman—even a butch lesbian woman—it would be too easy to read his outsider status as some kind of essentialized gender difference rather than as a difference in expression of masculinity.

RHH: We all believe we’d never sell out our friends for money and perks, and yet when most of us are put to the test—well, the world we’re living in is a pretty clear indication of what can happen. I think political fiction is totally vital and also teeming with potential missteps: the possibility for being didactic, condescending, etc. These are all pitfalls that we thought you avoided gracefully in the story, which despite its literal simplicity arcs toward a real moral complexity. Do you conceptualize your work as political? What are the consequences of doing so?

SH: Well thank you for the compliment! This story became more political as I continued to work with it because I’ve become less and less hesitant about directly addressing structures of power (state and otherwise) that attempt to govern every single aspect of our lives. I don’t think it’s possible to write literature that isn’t political—some politics are just less visible because they’re more readily accepted as facts of life. While I’m of the belief that the best literature embraces nuance, I also feel that it’s dangerous to try to hide from the forces and institutions that attempt to beat the nuance out of us.

RHH: One of my former professors loved to talk about the imitative fallacy, and I think you avoid it expertly here, in that the story delineates monotony without being monotonous. You also eschew the opposite extreme, romanticizing physical labor. I think your innovative use of the first person collective is key here, and for me as a reader, the most effective part of this point of view choice is, paradoxically, when the story abandons it. Phil’s trip to the boss’s office represents a fragmentation that’s sad and inevitable, and when the collective voice resumes, it’s forever fractured. Is this aligned with what your intentions were for the point of view? And I also wonder how you think the present tense, which tends to get a bad rap, factors in here.

SH: Oh Lord, I feel so thankful for everyone who suffered through and offered feedback on my bloated, monotonous early drafts. It took me a really, really long time to develop this first person plural to where it is now. It’s such a demanding POV that can quickly grow tiresome for readers, and in many of my earlier drafts it was much more of a “royal we” than a true collective voice. But it was so important to me to get it as close to right as possible to convey the double-edged sword of collectivity—the way a “we” can be inclusive and empowering, or, just as easily, exclusive and controlling. And the present tense seemed like the only way to write this story about people who are boxed into a particular moment that feels immediate yet also repetitive. I imagine most of these guys as breaking from the collective-present at the end of the work day when they leave the Coliseum behind, but jumping right back into it at the start of a new shift. If I’d narrated in past tense, I’d have taken the crew out of the self-enclosed loop that’s so fundamental to the setting and the story. When Phil breaks from this loop for a moment, the “we” fractures, but it doesn’t crumble—it corrects itself and jumps back into rhythm, leaving Phil behind. My hope is that it’s not clear to readers whether this is a good or a bad thing. 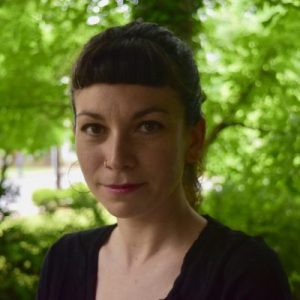 Rose Himber Howse is a recent graduate of the MFA program in fiction at the University of North Carolina at Greensboro, where she served as fiction editor of The Greensboro Review. Her first published work of fiction is forthcoming from Sonora Review. Before graduate school, she taught reading to teenagers and adults.