Emily Morris won Honorable Mention in the 2018 NC State Fiction Contest and has work forthcoming in Reservoir Journal. Originally from Charlottesville, VA, Morris is currently at work on a short story collection focusing on issues of family and class in rural Southern America. She is the 2018-2019 managing editor of The Greensboro Review.

Emily Morris: The majority of my role here is to attend to production. I also format the poems and stories, convert them into our house style, and, once the order is decided, format the issue and prepare it for print. A “day in the life” changes according to where we are on the production schedule, which is something I appreciate—I’m not stuck doing one task for too long. We all kind of change pace as the stories and poems roll closer to our print deadline. In the beginning, I’m going through all the submissions, seeing if we have previous submitters, logging their subscriptions to our journal, etc. After the editors narrow down their selections, I do a lot more with the physical stories in InDesign and editing them according to what the fiction and poetry editors have decided. There’s a lot of back-and-forth with the authors.

EF: The stories of yours I’ve had the opportunity to read evoke setting in powerful ways, conjuring issues of class in rural American towns through things like language and image. Sometimes, just a character’s affect seems to enrich your settings. Is there a particular interplay between place and character that you’re conscious of trying to capture when you write? Is that sensibility something you look for in the poetry or fiction you help select for the GR?

EM: Much of my identity is embedded in the area of Virginia that I grew up in and is certainly at the forefront of my stories. I’m very interested in the effects of place on character, especially in settings where it seems stagnation has set in, where no one really leaves, or even knows how to anymore. I’ve noticed, as these stories come together in my thesis, that there’s always a sentimentality in the character for that place he or she is from. When I weigh in, I try not to favor a story that’s interested in those things just because I am, but I think there’s something to be said of stories in which the setting matters so much that it can be antagonistic in the narrative. In fact, in our upcoming issue there are a few stories where place really does play a big part in how the characters feel, and their resulting actions.

EF: Michael Parker [a fiction faculty member at UNCG] is fond of saying that the major divisions in this country aren’t regional but rural/urban. Do you think of your stories as investigating specifically regional concerns, or as speaking to a reality embedded in a larger rural/urban divide that might transcend the specificity of place?

EM: I hope my stories do surpass regional concerns. All of my pieces are positioned in a small area of the rural southeast because that’s where I grew up and that’s what I know. I try to make my stories feel lived in—give them an authenticity that I couldn’t necessarily obtain by writing about a different area with similar issues. I think, though, that many rural areas are similar in terms of education, political orientation, religion, and race, and that they generally lean pretty opposite of more urban areas. So, yeah, I think about Michael Parker’s statement a lot, and it’s a statement I had never considered before coming to this MFA program. I hope that when I write about rural class issues, it resonates with everyone, because everyone falls on one side or the other.

EF: Are there lessons you’ve learned working on the editorial side of things that have helped your own writing? Or vice-versa: writing lessons you’ve transferred to your editing work?

EM: Editorial work has helped me learn to take rejections a little more easily, because now I’ve seen the hundreds of entries we get each go-around while only having space for a handful of stories and poems. There’s also the different tiers of rejections, which is something I hadn’t been very familiar with in the past. The difference between form rejections, form rejections with an encouragement to submit again, and then the personalized rejections, where the editors often explain that they liked your story, but didn’t have room for it, but would love for you to resubmit…would’ve never thought to be excited over a rejection until now.

In terms of my own work, I think I’ve learned to not try to write what I think an editorial team will be interested in. If I begin to lose that personal edge, then that’s not helpful to me or the person reading my work, because it’s always about standing out from that pile of submissions. Even if a submission’s plot may need a little reconfiguring, I think the editors would much rather work with that than a clean story with a little less heat.

EF: Last question. There’s a sense somehow that we’re in a polarized cultural moment—a time when we’re both more aware of sexual and gender discrimination and racism in society at large (as well as in the literary community) and where misogynists and racist are more emboldened. What responsibility falls on a literary journal and its editors working and publishing in this milieu?

We recently had author Ben Fountain come to the MFA program to visit, and he remarked how important it is for writers to get out, see the world, and come back to tell the truths of it. Writers are here to tell stories that hold us accountable. It’s the editors’ responsibility to let those voices be heard. Most journals’ processes, at their core, are about finding creative work that encapsulate the human condition, so often enough stories are commenting on past, present, or future social culture. I don’t speak for all literary journals by any means, but here at the GR we don’t wish to limit the subjects, styles, or voices we work with, and also do our best to select pieces that promote the journal’s vision, which is to publish the best stuff we get, period. 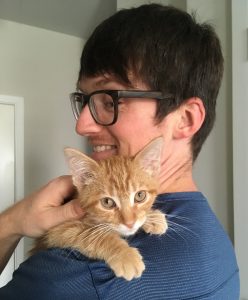 Evan Fackler is a fiction candidate in the MFA program at the University of North Carolina at Greensboro. You can find him on Twitter @evanchilli